Anne Catherine Emmerich was a Augustinian nun, which is a bride of Christ and one of the

closest to Him for she was blessed with many great spiritual gifts. She was given the Stigmata,

the ability to recognize Saints relics, and visions of our Lord's passion and life beyond any other,

and lived on the Eucharist almost exclusively the last decade of her life.  She lived from 1774 to

1824. Born on Sept. 8, the feast day of the birth of the Virgin Mary, in Flamske a small village 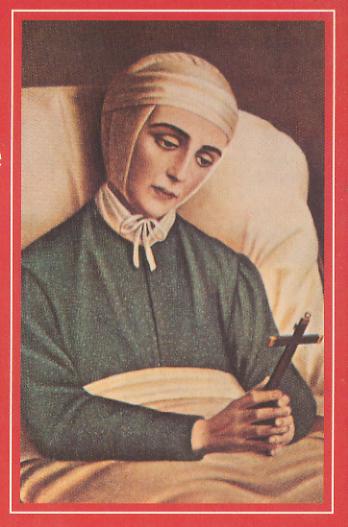 A painting from the cover of of one of the her books. She was called the invalid. But in reality she

was a loving, strong and powerful woman who was a victim soul for the church and suffered much.

from a 2 volume set on her life and revelations. The first book was written by Clemens Brentano

and spent the last 5 years of her life listening to her recount her visions. For he realized that she

was a window into the greatest events that have taken place on earth. He only wrote the Dolorous

Passion before his death. She called him the pilgrim and had seen him coming to her before he

showed up and was told spiritually to deal with him. After Brentano's death the Father Carl

Schmoger, C.SS.R. took up the task of arranging the rest of Brentano's notes into a 4 volume

book, "The Life of Jesus Christ and Biblical Revelations" what didn't go in there he put

investigations into Sr. Anne's wounds and her not eating any food except the Eucharist. Also

remain unknown among men. I recommend you at least read the Dolorous Passion. It is the

book that was used to make the film Passion of the Christ in 2003.

For more info on the books go to  Books worth reading.

At a very early age her Guardian Angel would appear to her and teach her, she also had visions at

an early age and thought all Christian children received them. In school when Biblical topics were

discussed she would talk about them from her knowledge of the subject. But she quickly learned that

this made the others uncomfortable and she began to keep them to herself. Her family was very poor

and she was not strong physically but was very strong spiritually, with tremendous time spent in

prayer and practicing mortification for the help of others. She spent hours crying in church over the

ingratitude of people, towards our Lord Jesus Christ. In winter she would kneel in the snow and from

the beginning she gave what little she had away to the poor and the suffering. Poor souls would

come to her and ask her for help, which she did at great expense to her well being. The Virgin Mary

came to her with the Child Jesus to be her friend, and also many Saints came to her to console

her. In her visions she went to the places and was a part of the vision, being in the room or at the

event and not watching from a distance.

As she grew older she made money by sewing, though she gave most of it away. Her goal was to

become a nun, a bride of Christ. In 1798 at the Jesuits church in Coesfeld Jesus came to her as a

young man with 2 crowns, one was flowers and one was thorns. She chose the thorns, and Jesus

pushed the crown down onto her head. She was a victim soul for the Church and kept this to herself.

her own suffering was nothing compared to this poor woman, but she was that poor but spiritually

wealthy, courageous, and very strong woman. On November 13, 1802 she entered as a novitiate.

She obeyed the rules to the letter and was not well liked. On Christmas of that year she had a

great pain in her heart that never left. This was not revealed until 1812 when a cross appeared

over her heart. The cross would change and grow and liquid would come from it at times. She

made her Solemn vows on November 13, 1803 and became a bride of Christ. She had many

trials, while working in the garden birds would come and land on her and they would sing

patiently dealt with her trials. The convent closed in 1811 though she stayed on into the next

year because she was so poor and sick. All souls day in 1812 was her last time outside. A

2nd smaller cross appeared above the first one which blood used to flow from on Fridays.

feet, and on her side. She always wore a bandage on her head to hide the Crown of Thorns

but now with all the other wounds, the public found out in February and the first commission

began the following month in March. She said that all of her blood seemed to flow to the

wounds. To the commission she said; "No words can describe in what manner it flows.".

When asked by superiors where the wounds came from; "I hope they come from the hand

By 1815 she couldn't walk or rise from bed. Anne had many visitors and liked to sew

things for children and the poor. She was very sick and received last rites several times.

it like a magnet. During her ecstasies she would still work in her garden but it represented

the Church, she was pulling weeds and taking care of parts of it by her tremendous suffering.

She traveled with her Guardian Angel to the ends of the earth and beyond, Paradise, hell

and purgatory. She said you can see the consecrated fingers of priests glowing even in

the fires of hell. She knew there were 9 planets more than 100 years before astronomers did.

She spoke of a place called Prophet Mountain and a book she was allowed to read, "The

Book of the Prophets" which she finished just before she died. She told how Melchizedek

and cities would be founded. She also spoke about the Chalice used at the Last Supper

at some time in the future, probably our times.

of the Passion of our Lord. On Friday March 30th at 10 AM her body was covered with

wounds like those from a whip and at 12:00 PM, her arms were stretched forth as if she

were being nailed to a cross. The story of the Passion is so vivid how in the garden Jesus

throughout history. Before He left the Garden an Angel descended with a Chalice that

He drank from to fortify Himself, for the supreme test.

She was a living saint, simple and humble, and loving and caring about others while

keeping God first in her life. She was an example of what Jesus said about our Almighty

Father; You have kept yourself hidden from the learned and the wise and have revealed

yourself to the simple and the innocent. After almost 50 years of suffering for her Husband

she was called home on the evening of February 9th, 1824.

I would recommend that you at least read the Dolorous Passion, I would rank it second

only to the Bible of books we can read. The Book of the Prophets is not a book kept by

any man, only God holds the key to this book. I do not know how many or if any others

have been allowed to read it. This little chapter does not do justice to the great story

of the life of Anne Catherine Emmerick, and I apologize Anne. I also thank you and Fr. Carl

and the Pilgrim, as you were with me in the airport in Lisbon, Portugal as I finished Fr. Carl's

book on your life and Revelations.