and visiting the House of Prayer, Ireland

of Prayer on Achill Island off the west coast of Ireland. It was built by her servant Christina

Galhager, who bought an old convent and remodeled it into what the Virgin Mary had

requested, a "House of Prayer". Which is a retreat for people to come to and pray and

heal, it is also a special retreat for Priests to come and strengthen themselves in the faith.

It will also be a refuge in the times that are coming as the Arc was for Noah and his family. 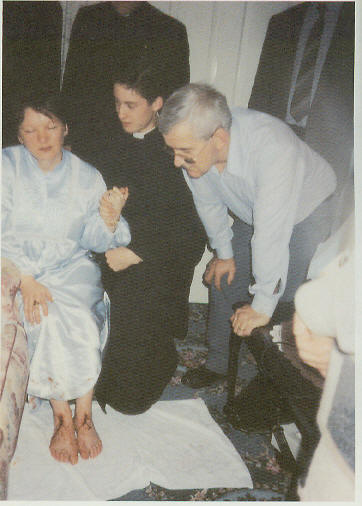 After landing in Shannon, Ireland and getting a car for the drive out to Achill, Island I had to

get used to driving on the wrong side or other side of the road. It was always interesting when

coming straight at me and having to swerve out of the way. The roads are very narrow over

from the edge of the highway. But I made it in one piece to a small town not to far from my

destination and I stopped in small hotel for the night.

area. She told me of a mountain that St. Patrick had climbed and done a forty day fast on top,

to convert the Irish people. So I decided to go have a look and climb the Croagh as they call

there mountains in Ireland. While it is the largest in the area along the coast it is not a large

mountain compared to others in the World. The top of the mountain was shrouded in fog as I

headed up the well used trail. There was a picture of the Chapel that was at the top but it didn't

look like there would be any pictures taken up there. The level of the fog was raising and

lowering on the mountain with intermittent showers. Climbing into the mist reminded me

of the door I was shown a few years ago, that opened and when I looked inside all I could

see was mist. From the Book of Revelation;

3:8 I know thy works: behold, I have set before thee an open

door, and no man can shut it: for thou hast a little strength,

and hast kept my word, and hast not denied my name.

in the fog. The trail was easy enough to see and follow, but you couldn't see very far ahead, so

you had no real idea what was coming only what was at the end of the trail. So it is with our

journey upon the earth, we can't see very far ahead but we know if we stay on the path it will

lead us to where we want to go, to our Creator. There are distractions along the way and

sometimes we don't want to climb, but it is the way, the path the Creator has made for us to

come to Him. The path is lined with the Blood of our Savior, Jesus Christ. I made it to the top

St. Patrick must have really been wondering what he was getting into coming back to

Ireland after having escaped from his captors and making his way home to England. But he

was called back to Ireland to convert the Pagans to Christianity.

I made it to the House of Prayer and found a room across the street. I went over to the

check the place out and see what the schedule was. The crowds are gone now, especially

on the weekdays. There are a few more on the weekends and the feast day of the opening

of the House draws bigger crowds. While there are still miracle healings happening, they

are rare, the people don't realize the grace and gifts the Virgin Mary bestows on all who

come to her House of Prayer, even for a single visit. She has promised to come to you at

your death and lead you to Heaven. I was alone in the chapel when John one of the workers

came over and started to tell me about Christina and the House. While he was speaking I

smelled the fragrance of roses which went away and the returned even stronger. This is the

smell that comes from Stigmata, which is one or more of the wounds of Christ that He gives

to a few of His servants. Christina Galhager has been given the wounds from the Crown of

Thorns and also in her feet, generally the wounds are not noticeable for she is uncomfortable

when they are visible, because of the attention they draw from others. Christina has

dedicated her life to helping to strengthen the Priests and is a "Victim Soul", for Jesus.

the World show Him. She also suffers from all the people who are very rude and ignorant of

her and what she has done, so little has changed. There are several major miraculous

chapel, levitation and communion from the Arch Angel Michael. Which were both caught on

in her time of abandonment which was like His when He was alone and abandoned. She is

a living saint and I would recommend and ask you to keep her in your prayers.